Like many other great ideas, the need for an English journal of traditional Chinese veterinary medicine (TCVM) was realized during an informal chat in a university hallway. It was 2005 and research of the basic science and clinical applications of TCVM had been published in China for more than 25 years. Since it was published in Chinese, most English veterinarians were unaware of the research or had no access to the information. Further, English TCVM researchers were also having difficulty publishing their findings in conventional veterinary journals, because most publishers and veterinarians did not understand the TCVM paradigm, subject matter and terms. An idea began to take shape for a journal that would contain research from around the world and become a source of continuing education and other information specifically for TCVM practitioners. No other such journal was available in English. There was already a Chinese publication called the Journal of Traditional Chinese Veterinary Medicine, so even though an international journal was envisioned, the name the American Journal of Traditional Chinese Veterinary Medicine (AJTCVM) was adopted. 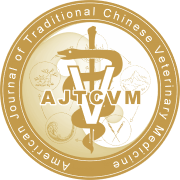 As with most new endeavors, the financial realities of creating a journal soon became very apparent. Although journal manpower was initially composed of unpaid volunteers, there were still the expenses of printing, binding and mailing. To acquire a financial base for journal publication and support the needs of the growing number of TCVM veterinarians, the American Association of Traditional Chinese Veterinary Medicine (AATCVM) was formed as a non-profit organization to promote TCVM worldwide. Unlike the mission statements of existing organizations at the time, the AATCVM included acupuncture, Chinese herbal medicine, Tui-na and Food Therapy with a focus on the TCVM paradigm of medicine. The AJTCVM would be the official journal of the AATCVM and dues from membership and advertising sales would be used to support the journal. Hiring a professional publishing company was prohibitively expensive, so the only feasible way to create a TCVM journal was to self-publish.

By 2008, the number of scientific article submissions and paid memberships had grown enough that publication frequency increased to 2 AJTCVM issues/year in February and August. Increased publication frequency required a reorganization and expansion of the AJTCVM staff into Editor-in-Chief, Associate Editors and Assistant Editors along with graphic design, advertising, webmaster, IT support and subscription departments. A Board of prestigious scientific reviewers was added. By 2010 interactive websites for the AATCVM and AJTCVM had been created through the tireless efforts of Dr. Lindsey Wedemeyer, along with the support of Zhen Zhao of the Chi Institute. The AATCVM and AJTCVM websites and inclusion of abstracts from AJTCVM articles in the EBSCOhost research databases did much to enhance the international presence, growth of memberships and financial independence of the journal.

Over the years, the quality and reputation of the AJTCVM have continued to improve, evidenced by an increase in international contributions and adoption as the official publication by other related organizations. Basic science researchers and clinical investigators from around the world have contributed research and clinical articles including: Australia, Brazil, China, Costa Rica, Germany, Great Britain, Grenada, Honduras, Hong Kong, India, Indonesia, Ireland, Israel, Japan, Malaysia, Norway, South Africa, Spain, Switzerland, Taiwan, Thailand, Turkey and the United States. The AJTCVM became the official journal of the American Academy of Veterinary Acupuncture (AAVA) in 2011, the World Association of Traditional Chinese Veterinary Medicine (WATCVM) in 2014 and the International Veterinary Acupuncture Society in 2017.

The AJTCVM continues to successfully fulfill its mission to provide the TCVM community with the highest level of peer reviewed articles on veterinary acupuncture, Chinese herbal medicine, Tui-na and Food Therapy. As well, the AJTCVM continues to promote the generation and publication of these therapies in animals to support the practice of evidence-based TCVM. Finally, it is hoped that a long-term goal for a quarterly journal can be realized in the future as membership in TCVM and related organizations grow and scientific submissions and citations continue to increase.

Get Notified When New Articles Are Published